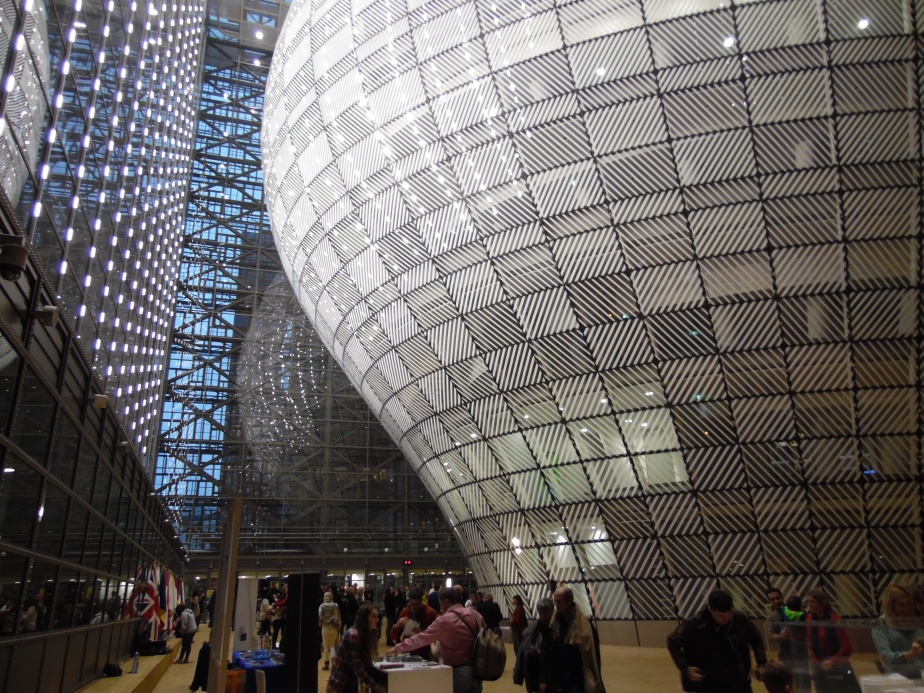 The majestic project of the Belgium ‘Samyn and Parnters Architects’ took five years to erect, but the whole process was much longer, starting back in 2004, and included the renovation of the infrastructure of both metro and railroad stations of Schuman square, and an old historic site of Art Deco masterpiece of Swiss architect Michel Polak – the Residence Palace.
The Samyn winning design for Europa Council meeting centre with a big ‘Lantern’ inside evoked a whirlwind of passions, and even some criticism of contemporary art lovers, especially of its facade, covered with four thousands of old, recycled oak widow-frames collected in demolition from all over Europe.
However today one can admit Philippe Samyn triumph as the elegance and sophistication of the finalized construction are breathtaking. As contemporary art paragon ‘The Lantern’ has already inspired the European Council to engage with the edifice adopting it’s image as a logo.
Hopefully, the aesthetic magic of the building will have an inspirational effect on the officials who will start exploiting the site in a few weeks.
From the beginning of 2017, the Europa building becomes the home of the two institutions representing the EU member states: the Council of the European Union and the European Council, where more than 6000 meetings are planned to take place annually.
Located at the heart of the European district, the Europa building combines a new part, an innovative lantern-shaped structure designed by the consortium of Samyn and Partners (Belgium), Studio Valle Progettazioni (Italy) and Buro Happold (UK), with a renovated section, block A of the Résidence Palace, a partly listed Art Deco complex designed by architect Michel Polak in 1922.
The entire project amounted to 321 million euro, and was funded by the EU budget.
The Europa was built in line with the principles of sustainable development. The building was designed  with modern systems to regulate lighting, humidity and temperature. It also includes green features such as solar panels or a rain water collection system.
The Lantern uses LEDs as the most efficient and eco-friendly lighting system. Most of the light does not originate from the lantern itself but is projected onto it by lamps placed on the inner side of the façade. A white silkscreen printing pattern has been put on the lantern to maximize light reflection. The lantern will be on for a few hours in the evening and in the morning in winter, adjusted to sunset.