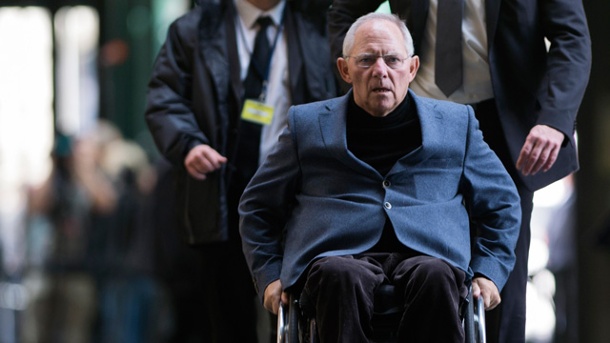 FinMin Schäuble at @CarnegieEndow: We need to focus on making economies more resilient

Asked if this would be possible in the short term, Schaeuble replied: “Yes, I think so.”

Speaking on the sidelines of International Monetary Fund meetings in Washington, he also said any new aid programs for euro zone countries should be without the international lender and so under European auspices.

The liberal world order needs the commitment of the US – Minister #Schäuble at @CarnegieEndow in DC. #CommonValues pic.twitter.com/QEsSKhowai

One thought on “Schaeuble: liberal world needs commitment of US”

Brussels 03.08.2021 Estonian Ambassador to Moscow Margus Laidre was summoned to the Russian Foreign Ministry Tuesday, August 3, where he was informed about the expulsion of an Estonian diplomat within seven days, the Ministry announced on its website.(Image: Moscow, City) Russia to expel another Estonian diplomat#Estonia #Russiahttps://t.co/uFgl0PVwpS — ERR News (@errnews) August 3, 2021 “Estonian […]

Brussels 03.08.2021 Belarusian anti-government activist was found dead in a park near in the Ukrainian capital, Kyiv, on Tuesday, August 3, and according to the police they had begun an investigation into whether it was a suicide or a murder. Last week, exiled activist Vitaly Shishov organized a Belarusian independence day rally in Kyiv. This […]

Brussels 02.08.2021 The United States has handed Russia a list of 24 diplomats who are imposed to leave the country by September 3 due to a unilaterally established three-year limit on the assignment period for Russian personnel in the U.S., Ambassador Anatoly Antonov said. (Image: Washington D.C.) 🔻📝The National Interest Magazine Interview with Ambassador Anatoly […]

Brussels 02.07.2021 Today,the European Commission president announced that 60% of all adults in the EU are now fully vaccinated. “Full vaccination protects us from #COVID19 and its variants” the European Commission Ursula von der Leyen wrote on her Twitter micro blog. “Let’s stay vigilant. Let’s get vaccinated! For our own health – and to protect […]

Brussels 02.08.2021 Militants from the Taliban movement seized the building of the regional state TV and radio center in the city of Lashkar Gah on Monday, August 2, the administrative center of Afghanistan’s Helmand province, TOLOnews television network reports referring to its sources. Afghanistan’s state broadcaster – RTA’s provincial center in #Helmand falls in the […]

Brussels 02.08.2021 Brussels 02.08.2021 On 31 July 2021, the President of the Republic, Mr Emmanuel Macron, spoke with the Prime Minister of Sudan, Mr Abdalla Hamdok, and then with the Prime Minister of Ethiopia, Mr Abiy Ahmed. These conversations were an opportunity to highlight France’s concern about the increasing fighting in the north of Ethiopia […]

Tigray: food as weapon of war

Brussels 30.07.2021 “Trucks carrying food supplies that could save countless lives in Tigray are being prevented from moving, apparently deliberately. Increasingly hard to avoid conclusion that access to food is used as weapon of war. It is the Ethiopian Government’s responsibility to provide access” the EU top diplomat Josep Borrell wrote on his Twitter micro […]

29.07.2021 The National Transitional Council (CNT) will meet on Friday, July 30, 2021 in an extraordinary session in Bamako, Mali capital. Although this special session does not appear in the work calendar of the parliamentary body of the Transition, the President of the Transition took the initiative in the face of the urgency of the […]

Brussels 13.07.2021 In South Africa’s most populous province of Gauteng, which includes the largest city, Johannesburg, at least six people had died, officials announced early on Tuesday, July 13. Another 10 bodies were discovered in the aftermath of the looting spree in the Johannesburg township of Soweto. #Looting spree continues in #KZNViolence #durbanriots | Part […]

Brussels 13.07.2021 Protesters clashed with security forces in several areas of South Africa and looters ransacked shopping malls on Tuesday, July 30, as frustrations over poverty and inequality boiled over in to the country’s worst unrest in years, with the death toll rising to more than 30. (Image above: social networks). Tensions are growing as […]